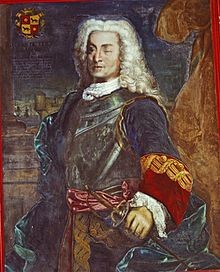 A campaign to christen the new research vessel of the British navy unleashed a joke on the internet: one proposal was to call it Blas de Lezo.
Blas de Lezo is attributed to the saying that “Every good Spaniard should always face England when urinating.” The Spanish admiral, famous for successfully commanding the Spanish troops during the British siege of Cartagena de Indias, remained throughout his life hostile towards the English for obvious reasons.
Now his spirit has been revived as a joke orchestrated against the same British army that he fought. The British navy launched a campaign giving the public an opportunity to name the new ship which turned into an intense ‘trolling opportunity’ in which participated Internet users around the world, including Spain.
The new polar research vessel of the Natural Environment Research Council (NERC) will be the largest and most advanced research ship in the UK. To celebrate the launch of the ship, a contest was held #NameOurShip. During the contest it was called NPRV, which was not very interesting and the public were invited to suggest a name. Following the announcement of the competition on NERC’S website, it didn’t take long for the trolls to act in an attempt of historic redress.
Spain, through the website Forocoches, participated and encouraged and promoted the joke. Their proposal was precisely that the ship should be named Blas de Lezo. Stating mockingly “He was one of the best sailors in the world and made great contributions to British underwater research.” Blas de Lezo was a one legged one armed and one eyed Spanish admiral known for defeating a fleet of a dozen British warships during the battle of Cartegena de Indias in modern day Colombia in 1741.
RSS Blas de Lezo was the second most popular proposal, with 35,574 votes. Not only did Spanish Internet users vote. In Taringa, a network of popular forums in Latin America also encouraged users to join the initiative: “Let us unite our brothers in ‘trolling’ these English they have the Falkland Islands and now we will take away a boat!” The forums were giving clues on how to vote several times and encouraged the use in Twitter of the ‘hashtag’ #BlasDeLezo to promote the idea.
Albeit second from the top of the list, the name of Blas de Lezo was deleted by the Research Council of the UK from the list as it was considered offensive and a second campaign was launched. Forocoches came back with another suggestion of ‘Rocinante’ the fictional horse of Don Quixote. This time the name should not have been considered offensive but has also been deleted from the list.
The British themselves have taken this with their own sense of humour. Blas de Lezo was the second most voted proposal, the first was as a result of another ‘trolling’, and more than 100,000 people voted for the boat to be called RSS Boaty McBoatface.