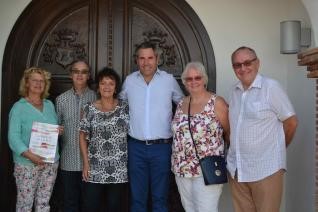 The Mayor of Mijas, Juan Carlos Maldonado, called for calm to the 11,000 plus Britons residing in the town.

A significant share of British residents of Mijas, have developed the association “Brexpats In Spain”. Brexit approval has generated a huge concern among the British community of the Costa del Sol and as a result the group aims to find ways assist and also give advice to its members who wish to apply for Spanish Nationality.

However, the mayor of Mijas, Juan Carlos Maldonado has called for calm to the British community in the municipality, following a meeting with spokesmen of that association. The mayor recalled that since the green light had been given to Brexit “those affected have continued to approach the Deputy Mayor of La Cala for information.”

“From the Foreign Department of the Town Hall we are in continuous dialogue with all those affected by this process in the UK and are responding to all the questions as they arise. They are currently approaching our offices to ask, especially on the issue of health, ‘ said Maldonado. In addition to questions about health there are also concerns about fiscal, administrative and economic issues.

“Among the most important questions we encounter at the request of many of these foreign residents are how to acquire the Spanish nationality. We informed them of all the procedures they have to follow and how they can achieve it. In addition, once constituted as an association, we will continue to work closely with them because we want them, regardless of the British process to exit Europe, here in Mijas continue to feel at home “he said.

The British who came to meet recently with the mayor were very satisfied with the meeting. The next step will be the creation of this new partnership, which will inform and fight for the British community on the Costa del Sol, in addition in order that the expat community feel connected and supported against Brexit. The group also wants to extend support to all Britons residing in the rest of the province.