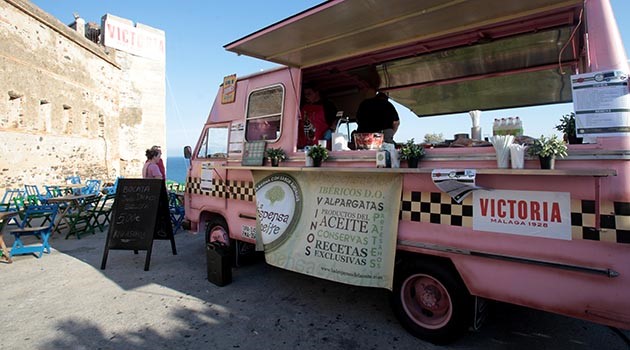 ‘Food-trucks’ made in Málaga

The company Gastronomicc is a pioneer in the province in the design and manufacture of food-trucks and organises a festival in Andalucía. The ‘food-truck’ is gaining ground in Malaga. The trend of street food and particularly food trucks is an idea which has been imported in recent years from the US and was popularised on Spanish television when the channel TVE held a competition in 2015. Owing to the growing popularity of food-trucks in the past year several municipalities have organised street food events, during which food is prepared and serves food from the vehicles. Aware of this boom two entrepreneurs from Malaga have created a company which specialises in the design and manufacture of these kitchens on four wheels.

They are Fernando Huertas, 39 who has a background working in the automotive sector and insurance; and Laura Escobar, 37 a journalist specialising in gastronomy. After a chance meeting, and several conversations later came the idea of creating Gastronomicc. They started a year and a half ago and after the first few months they organised artisan beer events and food stops on biker routes. This year they have embarked on their biggest challenge: an Andalusian food-truck festival.
Through these events they hope to publicise their work as designers and manufacturers of these vehicles, “which adapt fully to the needs of customers,” says Huertas, who explains that prices vary considerably, from 15,000 euros for the most economical models up 200,000 euros for the most modern and sophisticated. At the moment, they are finalizing the manufacture of a bus-malagueño restaurant for a client with a cost of one hundred thousand euros. “They are turnkey projects, but we fully adapt to what the customers ask for”, says the head of Gastronomicc, for whom the ‘food-truck’ trend is finding many bureaucratic obstacles in Spain, due to the limitations in serving food in the street. “In theory we are ‘street peddling’, so that licences are required from each local authority, so imagine that you have to ask permission in every town or city.” In this regard, adding that some Spanish cities such as Vitoria, issue temporary permits that allow these vehicles to park and work several days a week at various locations.
Meanwhile, here in Malaga, those responsible for Gastronomicc have filed a motion at a council meeting at the City Hall in Malaga to modify the city plan so that the installation of ‘food-trucks are allowed ‘in certain areas of the city. “They do not compete with other restaurants, because they do not remain fixed,” says Huertas, who admits that these businesses should pay rates in order to operate legally.

The next stop of this festival will take place in June in Priego de Córdoba, and discussions are taking place with other towns in Malaga to host more events. “The profile of customers who dare to set up a food-truck” Huertas says “ranges from hoteliers and entrepreneurs who already have a restaurant and are looking to diversify.”
The ‘food-trucks’ are also already finding their first opponents in Spain. Medical expert nutritionists Europe Institute of Obesity (IMEO) believe that the rise of this business model represents “a new wave of fast food, touted as a gastronomic novelty on wheels.”
“90 percent of that on offer consists of burgers, sandwiches and hot dogs filled with sauces; including chips; ice cream, crepes and ‘muffins’; and precooked pizza dough and dishes which are fried, breaded or battered “, they say.