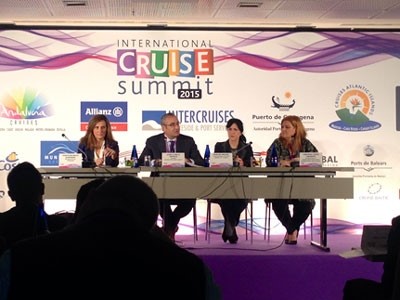 In the V edition of the International Cruise Summit forum, the shipping industry recognises the soundness of the Mediterranean as a base to send their best ships to Asia

The main players of the cruise industry in the world come together recently in the V edition of the International Cruise Summit Forum 2015, an event in which the port of Malaga featured in order to discuss new business opportunities this sector. The experts agreed that the industry has enjoyed good health and has gone from strength to strength including those cruises with the Mediterranean itineraries. However, they put the focus on the major shipping companies which plan to conquer the Asian giant, where they will send their best boats. “China is potentially a worldwide market” highlighted Pullmantur group president, Jorge Vilches, who also said that after the Asian tourist gets to know the world of cruising they will also want to come to Europe which will feed back into new business in the area.
From MedCruise it ensures that the commitment to the Asian market is “a reality” taking into account that the Mediterranean offer fits in with Asian preferences. In fact, some companies are building ships for this specific market. The experts also pointed out Cuba as a “great opportunity”.
This increased competition is one of the elements being considered for Malaga and the chairman of the Port Authority, Paulino Plata, said forecasts of further growth. “At the close of 2015 is expected to have an effect on this market in the Mediterranean ports, with very positive data influencing the activity of our port,” he said, after considering this forum “is of great interest to strengthen meeting with key players in the cruise sector and meet the needs of today’s market.”

For his part, Councillor for Tourism of Malaga, Julio Andrade remarked that “Malaga will continue to work to be in all the forums that promotes tourism in the city.” In this sense, the president of Costa del Sol Tourism, Elijah Bendodo, praised once again the institutions which promote this area. “Not surprisingly Malaga can boast one of the best European ports, which is acquiring an important prestige. The area is leaving a significant economic impact on the city and cruise passengers visiting give us a higher than average mark of 8.62 ‘he said.

The president of State Ports, José Llorca, used his speech to say that this year will be “fabulous” for the cruise industry in Spain, which will provide more than eight million passengers in 2015. In September the cruise passengers figures increased by 12%. Also, the director of Turespaña, Marta Blanco, said that the contribution of the cruise industry is “fundamental” for the Spanish economy. “This sector is key and can help significantly development international tourism,” he said.