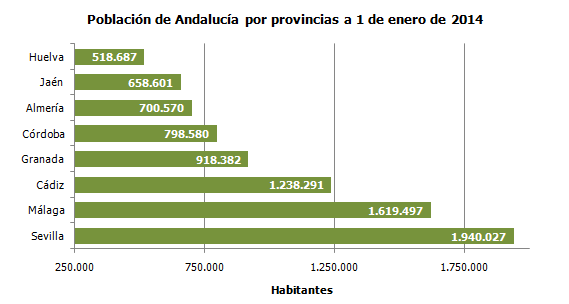 Population grows in Malaga despite average for Spain falling

Victoria
The population of Spain as a whole seems to be dwindling due to low birth rates and the effects of the crisis. However the number of inhabitants in Malaga continues to increase. In 2014 it became the province with the highest population growth, followed by the Balearic Islands and Santa Cruz de Tenerife.
The most recent studies from the National Institute of Statistics show that there were 1,632,949 people living in Malaga last year. This is 13,236 more than in 2013: a significant increase, especially when one considers that Spain lost 72,335 inhabitants during the same period. In fact, the province gained more residents than the rest of Andalucía combined. According to Alfredo Ruiz, a retired professor from the Geography department of Malaga University, the population of Malaga is growing due to “thousands of individual decisions.” Including the province’s ability to attract new residents. It is not only appealing to people from other European countries, but also to workers from elsewhere in Spain.
Last year Malaga gained more than 11,000 new residents of Spanish nationality and 2,500 people from elsewhere in the EU, bringing the total of the latter in the province to 147,000. As well as these, others came from non-EU countries, including Russia. There are now 19,000 of these residents, which is 1,400 more than in 2013. The Asian population in Malaga also increased to around 14,000 in total, and more people came from America, although the figure is much lower (2,800). This helped to compensate for the departure of African and Latin American residents, who either returned home or went elsewhere. This trend is continuing, but less so than during the early years of the crisis.
Alfredo Ruiz explains that two phenomena come into play here: “On one hand economic immigrants from Africa and South America are leaving because they have been hit hardest by the crisis. Their employment was the most insecure, even though some of them are well qualified. On the other hand, Malaga is highly attractive to Europeans. There are young people who come here and set up businesses,” he explains and the majority being made up of retirees who are enticed by the climate and quality of life. Malaga is continuing to lose its own young residents because of the lack of employment prospects. In 2014, 2,457 people from the province headed abroad. “The best ones are leaving: nurses, doctors, computer experts, architects, engineers…. professionals who are key to our recovery,” says Alfredo Ruiz. This partly explains the growing trend of Malaga losing its young, productive population (especially in the 20 to 39 age range), while the number of pensioners is increasing.
On the other hand Malaga is a magnet for Spanish workers from other regions of Spain.
In fact, 14,176 people moved to Malaga from elsewhere in the country, which was a lower figure than the year before.