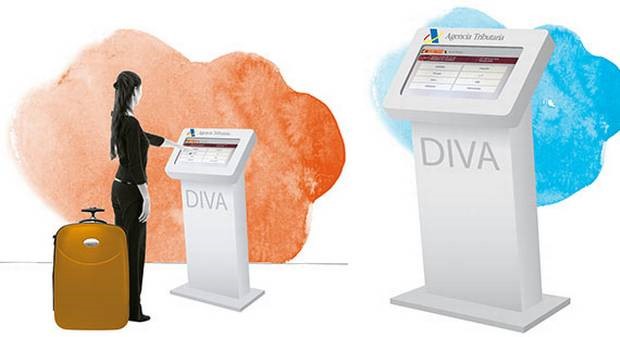 The new process to request the return of the tax replaces the manual stamping procedure and will be installed in airports, ports and shops across Spain
Shopping by tourists is big business and millions are spent by those travelling to Spain from beyond the European block. One of the strategies of the Government is to diversify the sector and simplify the process of returning IVA. The Tax Agency has just launched an electronic system to return IVA to travellers (known as ‘tax free’) who do not reside in the EU. The new system, called “DIVA” will allow the visitor to “expedite the procedures for the stamping of documents that are required for the refund of the tax upon departure from the territory,” explained the Ministry of Finance.

To this end, reading devices will be installed at strategic points of transit for tourists (airports and ports) and also for the shops that request it, which will have the advantage of transmitting the information directly to the Tax Agency. Until now this process required to be validated manually by stamping the purchase invoices.
With the new procedure the traveller will request in the shops an online form (DIVA form) that can be validated electronically, for the purposes of the tax refund, at the points where the machines have been placed at customs locations. Once stamped electronically you can then claim a refund of the tax at the store where you made the purchases, or from the Tax Free management entity responsible for the tax refunds located in the corresponding boarding area. To request the return of IVA, in addition to not being resident in any EU country, it is necessary that the amount of each invoice of purchase exceeds 90 euros.

The new system is now set to be launched after having been tested at Madrid airport. The objective is to extend it to another thirteen locations (Barcelona, Valencia, Seville, Palma de Mallorca, Bilbao, Malaga, Alicante, Ibiza, Mahón, Castellón, Gerona, Asturias and Santander). It will also be operational in the ports of Algeciras, Malaga, Alicante and Tarifa, and also at land based customs areas at la Línea de la Concepción and la Farga de Moles (Lérida).