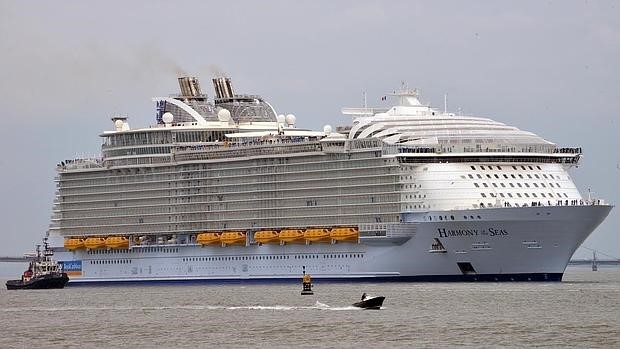 Some 5,500 passengers, mostly British, landed in the city on the first leg of the ‘Harmony of the Seas’
The largest cruise ship in the world left the French shipyard a couple of weeks ago where it was built and arrived in Málaga last Friday. The stop over resulted in around 350,000 euros being spent by the passengers in the city, as declared by the general director of Royal Caribbean Wangüemert Bethlehem. More than 5,500 travellers out of the 6,500 travelling began to disembark in the port of the capital at around nine o’clock in the morning, an hour after it berthed.
“The captain, a Swede who has been in this port with boats of similar characteristics, highlighted the ease with which it operates in these facilities,” said the chairman of the Port Authority, Paulino Plata, in the joint appearance with the head of shipping on deck 6 of the giant ship which is 362 meters in length, 65.7 meters wide and 9.1 meters deep.
Wangüemert, before starting the tour of the facilities, with the press and the authorities, of the entire floating city with a range of leisure facilities, stressed the commitment of Royal Caribbean to the port of Malaga, which this year has increased by a ranking of 18 %, reaching the figure of 26, which transported almost 100,000 passengers, representing an increase of 21% over last year. “Travellers gave high marks to the port of Malaga, with a satisfaction level of 8.6 on a scale of one to ten,” said Plata. However, the head of the Spanish base of the company could not comment on when this shipping company would establish its homeport in Malaga. What he does make clear is that the ‘Harmony of the Seas’ will return to the capital of the Costa del Sol in late October on its way to the US.
Fully booked
This giant of the sea, with its 2,747 cabins, came to Malaga and was fully booked on its maiden voyage. More than 80% of the passengers were English who embarked in Southampton and will finish the cruise in Barcelona.
The dimensions and the facilities on are impressive with oddities like the presence of a park on dock 8 with 10,000 plant species named after Central Park, or having the highest slide in the world on a boat. The construction of the ship cost around $ 1,000 million, of which 75% of the passengers were left to discover the city of Malaga.