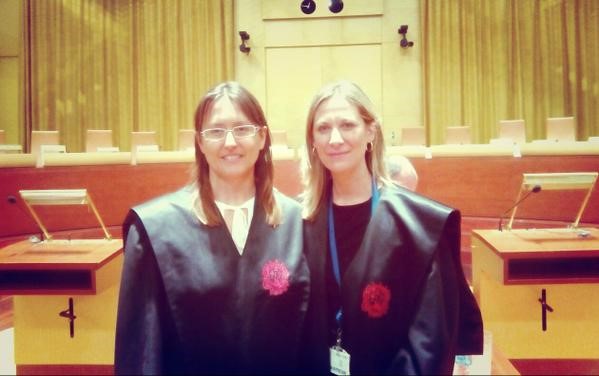 The Malaga Acoge legal team Arantxa Triguero and Liliana de Rossi, participated at the end of June at a hearing held in the Grand Chamber of the Court of Justice of the European Union regarding the case of a father who was refused a residence permit in Spain due to a criminal record despite having guardianship of two minors: a Spanish boy and a Polish girl.
During the hearing, all the states of the European Union who participated supported the argument of Malaga Acoge: that Spain should assess the request of the residence permit of the person in their full circumstances and not refuse it directly under the Act of Foreigners (Ley de Extranjeria). “We have also supported the position of the representative of the United Kingdom: to be considered the right of residence of children as absolute and therefore, also the parents. Something the Commission also maintained. Alternatively, we have underlined that the evaluation should always be in the best interests of the child “, explained Arantxa Triguero, voluntary counsel and vice president of Malaga Acoge. The Advocate General has set a date to deliver its report on 25 November, although the judgement date is still not known.

The case is in relation to a person with two children in their care (one of Spanish nationality and one with Polish citizenship) who applied for a residence permit in Spain. However, Spanish legislation necessitates that the applicant does not have a criminal record. Thus, the case was put together from the perspective of the children and the consequences if the father cannot work in their home country. Another consideration is the right itself of the children to live in Spain or another EU country, and both, as European citizens, the right to move and reside freely within the EU. That is why Malaga Acoge went to the ECJ because it understands that Spain should at least consider a request for a residence permit of that person taking into account all the circumstances and not directly dismiss it on a criminal record.
A case that started six years ago

The case began in 2009 when a person went to the legal team of Malaga Acoge for information on how to ask for a residence permit. He has two children for which he has legal custody, one of Spanish nationality and a citizenship of another country of the European Union. There was a positive report from the municipal social services in the locality where they reside, highlighting his good care of children.
The Spanish legislation does not entertain at any time the possibility of granting residence permits to people with criminal records, so the application would be refused despite having a son and daughter with European Union citizenship. This would leave the children at risk of being abandoned without a parent to take charge of them and also at risk of social exclusion. Thus, the legal team of Malaga Acoge decided to move forward on this issue due to the difficulties the father would have in complying with his parental obligations whilst at the same time not being able to get permission to work. Further no financial contributions were being made by the mothers of his children.
In this situation, the legal team of the association applied for a residence permit for exceptional circumstances, with the intention that the authorities would consider the request, despite his criminal record. The exceptional circumstances was the effect of non-assessment on two dependent children, one of Spanish nationality, therefore entitled to live in Spain, and a national of another EU country with the right to move and reside freely in the EU. That is, it makes no sense to expel a person and thus deprive their children of the genuine enjoyment of the substance of the rights conferred by the status of citizen of the Union. “We understand that non-assessment of the application for a residence permit is contrary to the right of children solely because of the criminal records of the parent. It should not be grounds for refusal in itself, and all surrounding circumstances should be taken into account, “explained Liliana Rossi, lawyer for Malaga Acoge.
The request was denied by the Migration Board, under the General Secretariat of Immigration and Emigration of the Ministry of Employment and Social Security, by the applicant’s criminal history. Malaga Acoge then appealed to the High Court, who again denied the request based on the same reason. The next step was to bring the case to the Supreme Court, which was hesitant to apply the Spanish law against European Union law and decided to ask the Court of Justice of the European Union (ECJ) in Luxembourg. Two representatives of the legal team of Malaga Acoge attended on June 30 to participate in a hearing before the Grand Chamber of 15 judges owing to the great importance of the case, as the judgment of the ECJ is binding in all countries of the European Union. Meanwhile, the case is stayed in the Supreme Court, which will wait for the decision of the European court for sentencing.

At the hearing, the representatives of the legal team had 15 minutes to argue their interpretation of the law, and so did the Spanish state attorney and the UK, since the case has been linked to a similar one in England. Also lawyers from other member countries of the European Union gave their views upon request. So far, seven countries have conducted their observations in this case and in all cases have interpreted the law in the same way that the legal team of Malaga Acoge with Spanish authorities being in opposition.

Lawyers representing the case of the British minor go even further and believe that in circumstances like the children’s right to remain on EU territory is absolute and residence permits for the parent should be automatic, so that the child can fully enjoy this right.
“It is a case through which the legal team of Malaga Acoge wishes to bring about a fairer interpretation of the law throughout the European Union”. As stated by Arantxa Triguero. Further the vice president of Malaga Acoge, highlighted that the decision “will deepen the essence of European citizenship and nationality of each of the member states.”